It’s been a decade since Nerina Pallot released her debut, Dear Frustrated Superstar and in the intervening years we’ve seen her grow as an artist. Having experienced the industry both with and without label support, and finding ways to self-fund her career (in a recent live stream Pallot told listeners that the staffing costs alone needed to release another single from previous album The Graduate would have reached at least £10,000!) through to writing for Kylie Minogue on her most recent album and working with Bernard Butler on Year of the Wolf, could 2011 be the year she finally makes it big?

Taking time out from promoting the album, Nerina sat down to talk with Colin about her experiences and plans and how marriage and her new baby son have influenced her career…

It’s been ten years since Dear Frustrated Superstar was released. If you could turn back time what advice would you give your 26-year-old self?

Have more fun, take yourself less seriously and work harder at your singing!

You’re a multi-talented musician – what do you most enjoy in your work? Songwriting? Performing?

I think performing has taken over from songwriting as I’ve gained in live experience and confidence. It took me a long time to feel that way.

You’ve written for Kylie for her most recent album and worked with Bernard Butler on Year of the Wolf. Do you have a checklist of people you want to collaborate with?

No, not really. Prince maybe but I’d be too in awe and probably fall apart in his presence.

How has becoming a mummy influenced your work?

Well, my work is no longer the most important thing in my life, which will hopefully make me a better writer as a result. Having a child immediately places you within a community whether you want to be in one or not – and before, I was definitely a loner – but the great discovery for me has been that I see the world through kinder eyes, I think. And as a result I want to write songs to comfort people rather than to go on and on and on about myself, my head, me me me which I was a bit (or a lot!) prone to before.

Wolfie’s birth was a suprise to all of the fans who had watched you promote The Graduate via your live online streams – we had the odd inkling that something was going on, but did you enjoy the whole secrecy of it all?

Well, it felt like this fabulous secret, but it was also partly because I didn’t want to tempt fate and felt that until he was safely in the world I wasn’t going to make a massive fuss. A few people started to guess but only by the time I was about 8 months gone – when they thought I might be newly pregnant. It was fun seeing the shock on their faces when they realised I was going to have a baby within a month!

Year of the Wolf sees you return to a label – how has your turbulent relationship with the music industry prepared you for this?

I’m quite relaxed about it all really. I see it as two separate things. I make music. There is a music business. The two must interface at some point, but they don’t have to influence each other if you don’t want them to. At the end of the day, we are all trying to make a living and that is the shared common ground. However, as an artist your agenda is frequently different from the label, and only you have the true long term commitment to it so it’s balancing that with the very useful, and often critical, level of support a label can offer.

You have a talent for tackling major issues in your songwriting – obvious examples being ‘English’ and ‘Everybody’s Gone to War’. You manage to do this with a certain delicacy. Do you think music is an important tool in commenting on the world?

I still think so, although judging by how many people buy records by Pitbull ft. some bird with no clothes on, you might be forgiven for thinking it’s entirely irrelevant these days.

If you were to pick the most important song to you from each of your past albums, which four tracks would we end up with?

You seem to be always on the go – I don’t think there’s been a week between the release of The Graduate and Year of the Wolf that you haven’t been active. Even your new family commitments haven’t reduced your exposure! How do you do it?

Well, I’m going to let you into a secret: if more musicians actually kept bankers’ hours and had a half decent work ethic you’d see a lot more of them. I’m relatively lazy. A large part of being a writer, whether of words or music or both, is procrastination. I’m married to a man with a super human work ethic and he sort of shamed me into being more proactive and creative. Since I cut out the time I used to spend procrastinating I’ve been much more useful.

We get the feeling you’re about to hit the big time with Year of the Wolf – is it an exciting time for you?

(laughs) It would be nice if your feeling was right! But I can’t believe I’ve actually finished my fourth album – it seems quite mad to me so that in itself is exciting!

I shall be touring in the autumn, before then doing a few festivals over the summer, promoting the album and spending as much time as I can watching my little boy grow. 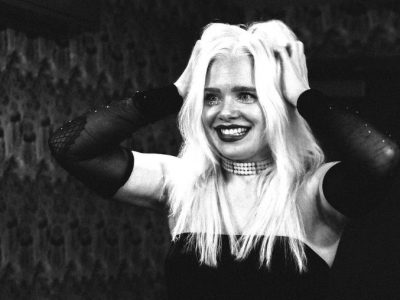