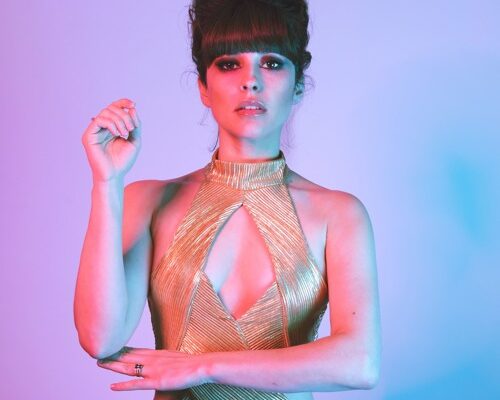 There are few albums we’ve been waiting for with as much anticipation as New Pharaoh’s debut – the casualty of the Pledge Music collapse and failed record label deals, it seemed that Antelias might never get the full release and critical acclaim that it so deserves. However, 2020 appears to be our year – New Pharaohs lead singer, Maya Marie announced that she was to self-release Antelias, allowing us all to finally enjoy one of the best albums of the last decade. That’s no exaggeration – Antelias is a sumptuous, stunningly produced LP featuring 12 perfectly judged, flawlessly performed and expertly written tracks that would each be the crowning jewel of many other artists entire catalogues.

The gentle guitar that opens ‘Just Because’ quickly expands to a track that somehow feels simultaneously like something from a Western soundtrack and something as far removed from that as possible. When coupled with Maya’s warm vocals that underpin the track the ends up with something achingly beautiful. This is followed by ‘Nothing Without You’ which trades the violins for more bass and a beat – it’s one of the singles that was originally released in the run up to last year’s aborted release and has been one of my most-played tracks.

Another gorgeous single, ‘Ya Habibi Yalla’, comes next and is the perfect intro to New Pharaohs – much like the opener it has that gentle guitar that lets Maya’s voice do the real talking. It’s everything we love about the wider album all in one perfect package.

Electronica creeps in with ‘Fire and Ice’ adding another string to the New Pharaoh’s bow – again proving an artist and band that are more than accomplished in their art. The film noir influenced ‘Heroine’ follows a similar template to the album opener to the same effect – it’s a wonderful track, but ‘This Changes Everything’ does exactly what it says in the title. It brings a real ‘coolness’ the album – there’s a real groove to the sound that kicks in as the track reaches its climax and sets up the latter half of the album perfectly.

What follows is the dreamy ‘Empire’ – another single, and while I hesitate to say another highlight in an album that is almost entirely highlights, it is. Sweeping and swoony in equal measure. The album finale – Shelter – is probably the most topical of all of the tracks on show; something remarkable given time between the album being created and released. The track is largely autobiographical telling of the Lebanon civil war that turned Maya and her family into refugees – it’s a deeply affecting track.

Antelias is very much hard to pin down in terms of influence – musically it inherits from so many cultures. There hints peppered throughout of a musical heritage taking elements from almost every country. From the ‘Western’ notes of ‘Just Because’ the the eastern sounds of ‘Wolf At Your Door’.

It would have been a tragedy had Antelias never seen the light of day. It’s a release that is clearly the result of a huge amount of love and dedication and this is felt through every note. It more than lives up to the tracks that had been previously released – those being just a snippet of what to expect rather than being the standouts. I genuinely don’t think I’ve been more enamoured with an album, this is one of those few instances that something has more than delivered on the already huge anticipation I had for it.